The big event of the month was a talk that Kelsie Steele did. One of the local churches here in L’viv asked her to give a talk to mothers on how to take care of your children, and still get everything else done around the house. Kelsie asked Katelin to help her out, and the the two of them worked hard on what to say, how to say it, and of course, then they had to figure out how to say it in Ukrainian! Kelsie did most of the talking, but Katelin did some too. It was Katelin’s first time to do any public speaking in Ukrainian, so it was a big first step for her! The talk was well-attended and well-received, and the ladies have since started a Facebook group where they can continue to offer advice and encouragement to other moms. 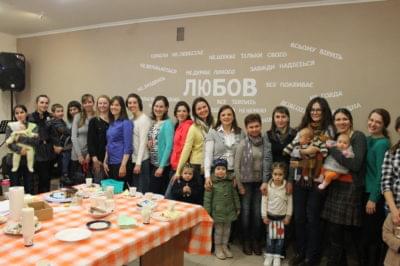 Kelsie and Katelin had quite the turnout for their talk!

More and more, we find ourselves using the internet in ministry. For a while now, I’ve been feeling the need to learn some web development skills. I’m currently working on a new version of our blog, and I’m hopeful that I will be able to post next month’s update on it! Once I’ve finished with this project, it will be time to move on to bigger things.

I’m currently working on gathering the documents for our renewing our residency permits. The first round of documents should be submitted within the next week, so you can pray that they would be approved.

The snowsuits have been put away, and all of L’viv is in bloom, so I think it’s safe to say that spring is here to stay! We are all enjoying the warmer weather, as well as the fresh spring veggies that are starting to appear at the market.