Carpathian Mountain Outreach starts in just under three weeks! Preparations have already begun, but much still remains to be done.

I'm happy to report that our scouting trip went well! We were received well by the village heads we talked with, and we were able to schedule the first four film showings of the summer without a problem.

As you may remember from last month, we were planning to migrate our existing Bible First students to the new web app we have been developing. I'm pleased to report that the migration was a success, and things are humming along nicely.

There are still a lot of bugs to fix and improvements to build, but at this point, most of them will have to wait until after CMO.

Just a few days ago, we received our shiny, new residency permits! We still have a tiny bit of paperwork left to do, but at this point, it should be just a formality. 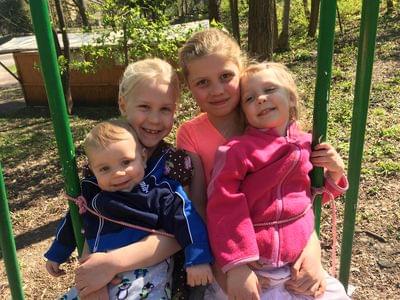 Despite all the rain, we have had some nice days!

Jonathan is quickly scooting all over the house these days. Although he's only going to get quicker once he learns how to crawl! The girls recently recited Psalm 23 in front of the whole church. We were especially proud of them, as speaking in front of people is not something that comes naturally for them.