There are several Bible-First-related things to report on, so I'll break this up into a couple groups:

Lessons 1-5 of the second edition of Bible First in Ukrainian are currently at the printers. We were promised they would be ready last week, so hopefully in the next couple days…? The next step will be to check over Lessons 6-20, make sure they are ready to print, and get them off to the printer.

We finished going through the Spanish Bible First files, and made notes of everything that needs to be fixed, but we are currently in a holding pattern with printing prep. Our main Spanish guy, Ralph Villeneuve, is busy with school, but hopes to work on the issues we found in a few months during his holiday break.

Now that we have recovered from CMO, Josh and I are dusting off our web-development hats and getting ready for the next push on Bible First Online. Hopefully by the end of the year, our students will have the option of studying online!

Some of you may remember that two years ago, Katelin broke her foot. Well, almost a month ago, she rolled her foot just like last time, it popped just like last time, and started to swell just like last time. We went in for an X-ray, but the doctors didn't feel like it was a complete break, likely just a crack. We were told Katelin didn't need a cast, just to stay off of it for a while and rest.

Sure enough, the recovery from this foot injury has been much faster. Last time, at the three-week mark, Katelin was just getting her cast off. This time, she was pretty much operational, albeit with some discomfort, and still taking it a bit slower. For which, we are very thankful! 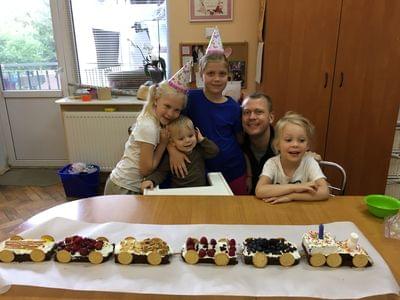 Both Lydia and Jonathan had birthdays recently!

One other big project we have coming down the pipe is a move to a new apartment. We have found a new apartment that is a bit bigger, but more importantly, the space is broken up in such a way as to be more usable. We will be making the final arrangements this week, and hope to be moving in about a month. So if next month's update is late, or gets skipped altogether, you'll know why!