We all know that God is our Heavenly Father. And we know that God is a Good Father. But why is He a Good Father? One of the reasons is because He lets us help Him with His projects. As any parent will tell you, kids love to do grownup stuff. Give them the choice between "cooking" with plastic food or cooking real food with Mom, or "fixing" things with play tools versus helping Dad fix something with Dad's tools, and they'll take the real stuff any day.

The Bible says that God was/is "reconciling the world unto himself". Missions isn't something that man came up with, it was God's idea. But then the Bible says that God has "committed unto us the word of reconciliation". God didn't have to do that. I'm sure He would have done a much better job of it. I'm sure He has to be very patient with us as we make messes, and sometimes do more harm than good. But because He's a Good Father, He decided to let us get involved in His grownup stuff.

A couple months ago, when the above thoughts popped into my head, I realized that one of the best things I could do for my children was to let them be a part of something bigger than themselves. Because we live in an apartment, taking the kids to the playground is part of our routine. On Saturdays, I sometimes take the kids to the playground so that Katelin can have some downtime. So we started taking stacks of Good and Evil invitations with us on our Saturday outings. On our way to a playground, we stop in a few buildings and put the invites in the mailboxes. We mark off the buildings on our map, and the next time, we do different buildings. The girls enjoy it, and even Jonathan has gotten in on the action! It doesn't take long, maybe fifteen minutes. After all, little attention spans are short! That said, a couple days ago, we got our first request for a Good and Evil, and we were all pretty excited! 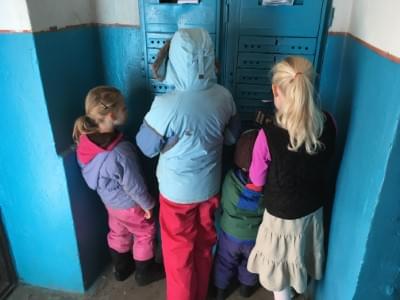 Working together to put Good and Evil invitations in mailboxes. 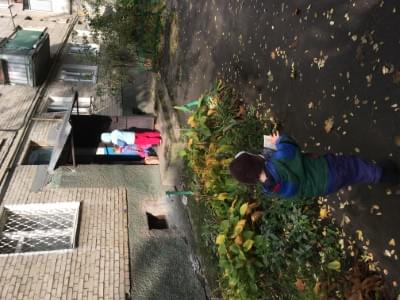 Jonathan follows his sisters to the next building entrance.

Our goal is to do a beta release of Bible First Online to a group of friends and acquaintances sometime next month, with a public release to follow sometime next year. The BFO application is mostly ready to go, so most of what needs to be done is in the realm of preparing promotional and support materials.

Covid cases are spiking in Ukraine, as they are in many parts of the world. Today's number of new cases was a new record: 13,357. That may not sound like much, but adjusted for population differences, that would be about the same as 100,000 cases in the US. That said, Ukraine's medical system seems to be holding up decently well, and things continue to be calmer in our part of Ukraine.

Katelin and I recently celebrated our 11th anniversary, and we celebrated with an overnight getaway. We left the kids with a babysitter, and I think they had about as much fun as we had! Katelin and the kids also regularly call Katelin's grandfather, who lives alone in a nursing home, and can't have many guests because of Covid. Thanks to the regular calls, the girls are probably closer to their great-grandfather than they ever have been. The girls are also hoping it will snow soon, although Katelin and I would prefer a bit more fall weather before winter sets in! 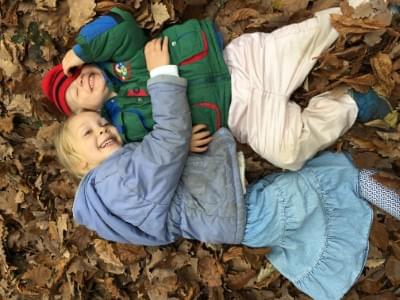 Nothing like a good old-fashioned romp in the leaves!